Tonight sees the first pub theo of 2012,a nd it is one that a few have been looking forward to for a while. Tonight we will be meeting in our normal place in The Golden Lion, the Wetherspoons pub in Rochester, to eat, drink and discuss the points that Rob Bell makes in Love Wins. For those of you that do not know the book, Rob Bell challenges a lot of our ‘traditional’ church thinking on heaven and hell and who will be ‘saved’ and who won’t be. It is a good read and you can see a video clip introducing the book here.

A few people have read the book in preparation, and I have come up with a few starting questions to get us thinking about where we want the discussions to be going. Tonight, with my pint, I will be starting the session of by asking whether anything in particular in the book provoked a particularly positive or negative reaction, whether anything was surprising, challenging or confusing and whether there was anything that people strongly agreed or disagreed with. I will also ask where people think Rob Bell gets it right, (if

at all) and where they think he has completely lost the plot! (again, if at all!) Then I have someother questions based on particular chapters if we need them …. usually people have enough questions and comments themselves so I hoep I won’t need those questions!

Tonight should be a good night … so if you are thinking of just staying in and watching some sad soap or whatever … why not join us, from 7.00pm (you can arrive whenever you like and join in wherever the discussion has got to) in The Golden Lion – it will be great to see you.

Following on from my last post this is what all the fuss is about – Rob Bell’s introduction / questioning from his latest book, Love Wins.
Via the comments Helen linked to Fred’s blog which is worth a read too – as is the full paper from NT Wright here.

What are people so afraid of here? 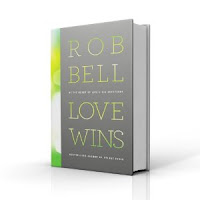 There is one type of Christian that winds me up ….. those that are always ready to jump on a band wagon and condemn something before they have even seen it or experienced it.

In my youth there were those who campaigned against the Life of Brian saying it was ‘blasphemous’. I remember talking to some in school (it was a long time ago!) asking if they had seen it ‘no!’, they said, ‘we’ve been told its blasphemous and so we won’t … and neither should you!’. Well I did and it is still one of my very favourite films.

More recently we saw those campaigning against the Harry Potter stories with a local church school actually banning the book in schools because it was ‘evil’. Again I asked ‘have you actually read any of the stories?’ ‘No!’, they responded ‘it’s evil so we are not going to put ourselves at risk and read that …. and neither should you!’ Well, I did, and watched the films and they are excellent. And … all along these were ‘resurrection’ stories.

In the last few days the lates thing for such people to campaign against is Rob Bell’s latest book ‘Love Wins’. Apparently it’s heretical. Rob Bell has become a heretic. It’s dangerous to read. Yuu can find some comments here, whereas Maggi talks sense here.

But back to those people complaining about the book and saying it should not be read – don’t even bother asking them if they have actually read it or know what’s in it ….. they can’t … it’s not even released until March 31st!

Not a cheap shot to raise my hits again, but John Buckridge from Christianity Magazine interviews Rob Bell here.

Some very interesting answers to questions – and I particularly like his spiritual disciplines of making the breakfast and packed lunch for his children but not sure whether I will share that with Sarah and the children here! There is also a great moment when he labels the American evangelical selling machine as anti – Christ rather than bringing glory to Christ.

It’s a good interview and worth a listen.

… I’ve got a nosebleed!
I’ve reached dizzy heights.
seems like the references to Rob Bell have sent the hits on here to the dizzy heights with SHP achieveing 100 hits in one day. That’s 80 more than my normal according to the counter which I have just checked out.
Interesting!

may be starting here following my posts of last week.

Feel free to drop in and share your views.

Wow – my post has been up only few hours in support of Rob Bell and already someone is here trying to diss the bloke! (Do these people search every hour for people who have made positive comments to attempt to convert them to their brand of truth?)

So I’ve taken a look at this blog and am shocked my some of the vitriolic comments here! Are these people Christians, Christian pastors even? I would humbly suggest a slight loss of plot, love and grace is occuring here! Even if you disagree with the guy then I belive treating with respect is still a necessity.

Here is a quote as to why they belittle Rob Bell:

In his road show, he dismisses creationism, the idea that the world literally was created in six days. And he argues that the Bible’s message is more about helping the world’s poor than about personal success.

Bell said that, even though his own nondenominational church is often described as evangelical, he doesn’t like to use that word anymore. “The word evangelical has been hijacked by people with a loaded political agenda.

What is there to disagree with in those 3 statement? None of them replace the fundamentals of Jesus, God incarnate, dieing for our sins and rising again? Why not just concern yourslf with your God given mission, and allow others to engage with their God given mission?

I find it sad that so many people are willing to believe they are right and not even consider than an alternative view may be correct. The church should be bigger than this! I find it even sadder that some people are willing, and see it as a mission, to attack others through their own blogs and even seekout posts to comment on, while they write as if they alone have absolute truth through denying their readers to make comment at all. My question: what are you so scared of?

Yesterday, along with around 50 other church and organisation leaders across London I was invited to a lunch reception at Premier Radio to hear Rob Bell, author of Velvet Elvis and speaker on the nooma series of DVDs.

I read Velvet Elvis in one sitting in November last year after good friend Johnny Douglas sent me a copy and loved it and have been looking forward to this event for a little while. I was interested to hear what Rob had to say and how others would react.

The event started with the showing of the new nooma dvd called breathe. It’s good, possibly one of the best, and it was worth getting together just to see that. After speaking very well for a short while Rob handled a good number of questions from the assembled bunch of evangelical leaders. Rob was just how you would expect him to be from the DVDs. Before us was an authentic man of integrity in love with Jesus.

I found it interesting as talking afterwards a number of people were heavily agreeing with what Rob Bell has to say. Rob’s desire, and the desire of Mars Hill Church, is to repaint the Christian faith. By this I think he means that he wants to get back to the basics of the gospels and look again at our doctrine and pratice. This means they are asking a simple question as they look back:

‘what didn’t we adopt from our early faith which maybe we should have done, and what have we added to our faith which is now cultural and not really as essential as we have grown up to think it is’.

In essence Rob is saying we need to keep asking questions, and no questions are out of bounds.

God must be moving as I’m sure, in the past, we would have all felt threatened by such words. I remember endless discussions in the past where I have been thought of as heretical just for wanting to ask questions!

I left the day with one challenge. Rob shared that as church our role was to bless. He shared how he was almost moved to tears when his neighbour told him he was a good neighbour. Church is to be a blessing to others, and that surely means church is so much bigger than a sunday morning or evening service. That meeting is just a small part. I would even suggest that people don’t need to go to the ‘Sunday part’ to be part of the church. Church is wider and it is what the christian community do to bless those around them.

My challenge?: Rob shared a morning service idea they did at Mars Hill. They gave out gaffer tape and asked people to put it across their mouths with this challenge:

‘if you wore that all week, would those around you know by your actions that you are a Christian?’

For a man, like me, that ikes to talk – that’s a massive challenge.