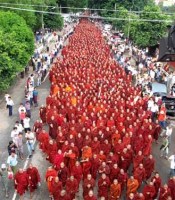 Some people have asked if I think writing letters or sending emails on behalf of the Burmese people really does make a difference. I believe it does (or I would not be involved) but this feedback email from the Burma Campaign UK is evidence that we can, and do, make a difference. if you have not responded yet … please do!

Last week we emailed you asking for your help in persuading the governmentof Thailand not to forcibly deport 3,000 ethnic Karen refugees back toBurma, to an area covered in landmines.

We asked you to email the Thai Prime Minister and the local governor. BurmaCampaign UK also contacted governments, MPs and media to let them know whatwas happening, ask them to lobby the Thai government, and report on the situation.

On Friday morning Thai authorities started the deportations, sending three  families back to Burma, but then halted them. The reason for halting the deportations was undoubtedly the international attention being paid to what they were doing. Thousands of people answered our request and sent emails to the Thai Prime Minister and the local governor. Media, including The Independent, reported on what was going on, and European governments also called on Thailand to halt the deportations.

Now we have heard further good news, the three families who were forced back to Burma were able to return to the temporary refugee camp in Thailand yesterday.

This crisis campaign is a great example of how we can all work together, Burma Campaign groups, individuals, working with and supporting Karen organisations defending their people.  Together we have made a difference, and no doubt saved lives and prevented horrific injuries. Thank you for your support.

However, the danger is not completely over yet. Local soldiers have still been pressuring the refugees to agree to return, and no permanent solution has yet been agreed that means the refugees are safe and secure. Senior level meetings involving Karen organisations and government officials are being held in Thailand to try to find a solution.

Burma Campaign UK will continue to watch the situation closely, and be ready to act if need be to try to prevent any further deportations.

A full briefing is available here.

The Independent article can be viewed here.

The Burma Campaign UK depends on donations from the public to carry out our vital work. You can donate online.

Thank you again for your support.