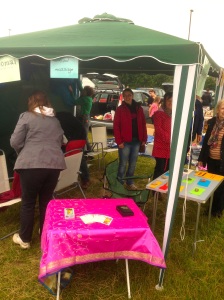 Well that was pretty amazing, and the best and most exciting Sunday that I think I have had for such a long time.

Most of the team awoke at around 5/520 am  to arrive at a large field by 6am. It was grey, quiet, a little chilly ….. but many people were active. As stall holders set their stalls up people were already trying to buy stuff. People asked if they could buy the icon and our deck chairs, and I think we could have sold the holy oils!

All through the day I think it’s true to say that people did not quite ‘get’ that we were the only stall there not trying to sell anything. People wondered about the catch and were not entirely comfortable with receiving something for nothing. We were not even pushing what we had to give away. If people looked interested we invited them to look more closely and take part. This sensitive low key approach ensured people were comfortable.

The day was amazing. I’m guessing thousands of people passed us, and we probably only engaged with say 50 people, but the levels of those engagements were quite amazing. People asked us to pray for or with them or for family members. People were interested in Psalm Readings and Jesus Deck readings. One person told me how they had met Jesus as they were trying to commit suicide and how the experience stopped that from happening. I think this was raised as the person was trying to make sense of what they had experienced.

That one conversation made the whole day worthwhile for me. The other personal highlight was, though, seeing the rest of team grow in confidence as they put their training into practice and saw that God used them … even in their nervousness! I love seeing people realise that they can be involved in mission and that it is all about listening to stories of other people.

As a trial we think this went well. As we ran the stall we were able to think of other things to offer (maybe a short communion service at 11am?) and how to set the stall up differently.

If you visited us today, then thank you it was great to see you. Sue and myself aso wish to thank the team – you really were amazing! l. It seems that everyone had at least one significant conversation with a guest to Dekhomai. So … next week we will be there … if you go to boot fairs come and say hi … if you think you might like to work with us on the stall, there is space and time for training so get in touch.