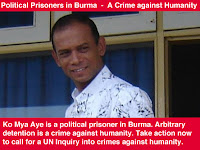 10th March is Ko Mya Aye’s 44th birthday. A leader of the 88 Generation Students, he has been in jail since 2007 for his role in the uprising that year, serving a 65 year jail term. The UN has ruled that his detention is arbitrary and illegal. Arbitrary detention is in violation of Article 7 of the Rome Statute. It is a crime against humanity. There are more than 2,100 political prisoners in Burma.

Take Action – email European governments
So far ten European countries support an inquiry. If we can get four more to support, we will have more than half of EU members supporting an Inquiry. Our first targets are Denmark, Latvia, Sweden and Luxembourg.
Take action here now!

London Protest Thursday 10th March 2011 at six European Embassies
On 10th March, Wai Hnin, daughter of Ko Mya Aye, will be leading a protest visiting the embassies of six European countries which have failed to publicly support a UN inquiry into war crimes and crimes against humanity in Burma. The countries are Sweden, Latvia, Norway, Luxembourg, Germany and Denmark. Wai Hnin will be handing in a letter to each embassy, asking why they are not taking action to support her father and other political prisoners in Burma.

Please join us for a protest at European embassies in London to persuade the European Union to support a UN Inquiry into crimes against humanity in Burma
Meet: 11am sharp, outside The Globe Pub, Opposite Baker Street tube station. Don’t be late!