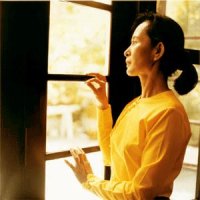 Aung San Suu Kyi Reaches 15 Years in Detention
On Sunday 24th October Aung San Suu Kyi, leader of Burma’s democracy movement, reached a total of 15 years in detention.  Although under Burmese law she should be released on 13th November, there are concerns that her detention could be extended, or strict gagging conditions put on her if she is released. You can take action calling on UN Secretary General Ban Ki-moon to do more to secure the release of Aung San Suu Kyi and all political prisoners.
Wai Hnin’s Jump For Freedom
Wai Hnin overcame her fear of heights and did her jump for freedom, which has so far raised more than £8,500 for former political prisoners and Burma Campaign UK. Many thanks to everyone who has donated. If you haven’t, you can still donate.
You can watch the jump on our YouTube Channel.
UK Premier of New Burma Film – Tuesday 2nd November
‘This Prison Where I Live’ is a film about two comedians. Maung Thura, better known as Zarganar, Burma’s greatest living comic. Relentlessly victimised by the Burmese military junta, he is now in prison. Michael Mittermeier, in stark contrast, is free to practise his act as one of Germany’s leading stand-up comedians.
UK Premiere – Tuesday 2 November at Ritzy Picture-house, Brixton, London.  Book online
Use the red button with 18.15 to book.
There will also be a special Q&A with director Rex Bloomstein, Michael Mittermeier, Amnesty International UK, Wai Hnin from Burma Campaign UK, and The Co-operative.
All the best
Anna
Burma Campaign UK
Support our work: Donate to the Burma Campaign UK and make a difference today. You can be sure your donation will make a difference. Supporting the Burma Campaign UK is one of the most effective ways of supporting the struggle to free Burma. Donate now.