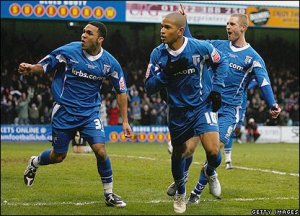 We had a great day supporting the Gills and have returned proud of the team today. I think those watching at the ground and on the telly will have seen that the Gills were a match for high flying Villa and the 2-1 result shows the Gills can hold their own. Some feared the result may be an embarrassment, and I think the Villa fans expected to win by a much bigger margin, but today was great day for the players, fans and the club. The boys haven’t stopped talking about it since we got home!

Just hope we can play like this for the rest of the season … if we can promotion would be a definite! 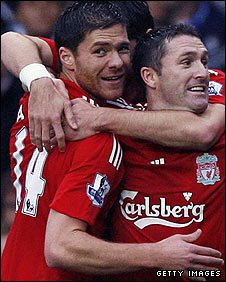 I know I have a few Chelsea fans … but I can’t let this day go past unmarked. The first team I ever saw play when I was 8, the first team I ever considered myself to support since then … deservedly in their rightful place at the top of the premiership, 3 points clear!
Great weekend for football with a Gills win too! 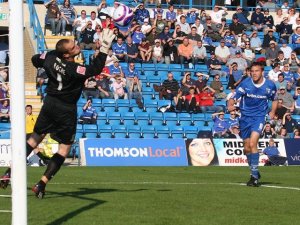 Tom found this pic from the game on Saturday – to the right of the ball in the back row you can see us all not quite believing the ball is going into the net!

I am going to the football today to watch Gillingham. For the first time ever in years I really can get no enthusiasm and, if I did not have season tickets and the boys were not depending on me to get them there, I think I would park myself in a bar somewhere and join others watching the England game later.

Why have I lost enthusiasm for the team that I will say I still love? Is it about disappointment of performances, lack of commitment from management and players, pain of mediocrity again? I don’t know, but I think it is a combination of all of that, and more I guess.

A large part, though, in my analysis of this thought pattern is the lack of engagement with the fans of the manager. He walks past the fans each week 4 times (at the start and end of each half) never looking up from the floor. He never looks at the fans, he never acknowledges the support, he never claps the fans; he just walks out looking at the floor and walks in looking at the floor. There is no engagement. It is like he is uninterested. This is the first time I have experienced this lack of interaction from a manager towards fans. Interestingly, this non-interaction occurs amidst the others players usually walking around the pitch and clapping the fans for their encouragement at the end of the match.

For the first time last week the manager came out and no one clapped him. People continued with their conversations. The team had come out earlier and been cheered. The manager came out and there was nothing. There was no engagement. This is the first time I have ever seen the fans fail to acknowledge or clap the manager when he comes out of the changing room. The lack of engagement was telling.

Today I am tempted to stay away. It seems selfish and sounds like I am sulking because I am not being treated in a way that I feel I should be. That could be true but I hope that is not the case.

I wonder if there is something in this experience that I can learn for church, particularly in a cathedral setting. I remember Adrian, the Dean, saying at the start of my life here that as we process in and out he attempts to make eye contact with people in the congregation. I do this now other wise we walk in and out and could give the impression of lack of interest due to lack of acknowledgment or interaction with the rest of the cathedral community.

It’s easy to be stuck in the ritual of stuff, whether that be training football players or processing down an aisle, or leading a Eucharist. At the cathedral I think we are quite good at engaging with people, but I do wonder whether part of church decline is to do with this over-bearing attention to detail, but dis-attention to personal engagement with other human beings.

Could it be true that some people have not stopped loving God? Certainly people have not stopped calling themselves Christians. I know this because I have met many over the last few years. People are interested in God, but feel totally unconnected and disenfranchised from the church. Feelings that are caused, in part, by a combination of lack of interest in them from those seen to be in authority, but also from a realisation that there is nothing they can do to cause a change.

To move forward people need to feel their investment is authentic. They need to feel they have a say and that what they say will make a difference. As I ponder this while i look to develop a new Christian community with others I realise anything else results in a mediocrity of absence.

Yesterday I renewed my season tickets for Gillingham FC. £500 for 4 tickets seems like a bargain (helped by U11’s being only £50 for the season). As an aside we were able to move all our tickets to one row so it will be fun to all sit next to each other.

But – I can’t help wondering whether this is healthy fan commitment, or whether it is foolish and blind faith. Or maybe, in actual fact, there is no significant difference between the two!

Today has been a day of sadness when I have reflected on the events of the last couple of days.
Labour’s dismal performance in the elections and the election of Boris Johnson as the Mayor of London cause more than a little concern. I’m glad I don’t live in London at this point in time! A sad day for politics.

Today Gillingham were relegated to League 2. We’ve have not played at this level for some 12 years and I’ll be praying we cam move onwards and upwards quickly. A sad day for football.

These emotions of sadness have to be contrasted with the great joy experienced while spending time fixing and rebuilding a Guinea Pig run today with Joseph. W chatted, I measured, he sawed, we both hammered nails and in just a few hours we had a smart looking run for the newest members of the family to run about in. A happy day for family life.

Today is a nervy day, especially the next couple of hours.
Our house is experiencing tense nervous worries.
Many people today are hoping for Gillingham to win, and two other teams to lose so that we stay avoid relegation.
C’mon you Gills! 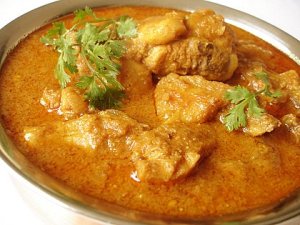 The weekend has been one of highlights only.
This weekend my brother, Steve, joined us and it was great to catch up and have a laugh. He also acted as my good luck mascot as he came to watch the Gills and it was our first win in ages. Sadly, he does not seem keen to come to more home games.
The sports results all seemed to go the right way this weekend – and BIG congrats to Spurs fans (sorry Jonny!)
A weekend of good beer, wine, whisky and curry (shockingly my first curry of 2008!)- what else do you need?

I’m still down after last night’s defeat, but I don’t think it’s all 100% this guys fault.

But … this is mad! I wish I had a job in which I could dismally fail and not reach my target and then be sacked but given £2million compensation. I clearly need to find a job I can’t have any hope of doing successfully and then fail, as everyone knew I would, so I can become a millionaire!

That can’t be right!

the high:
I caught up with a great friend today and sat in a great coffee bar to hear some good news. We chatted about some stuff and I left thinking how great it was to have good friends that you could be honest with and who can also be honest with me. I also got to see and hold his day old iPhone. It’s special!

the low:
I’m trying hard to recover from tonight’s excuse for a football team. It was another case of the fans having more passion and a greater desire to play than the team. My only exception to that would be Beckham who, despite not being match fit, charged around the pitch defending, taking nearly every throw in quickly and delivering a perfect cross for the ‘tall hillbilly’ to score from. I’ve had some lows following England, but this feels like the lowest!

Funny how emotions can operate between extremes in such a small space of time.