I had an empty day yesterday …. a day of space with nothing planned … so I took the opportunity to go for a meander around the Tate Britain, specifically going to see the Rachel Whiteread exhibition.

Stunning was an understatement …. this exhibition is just beautiful and I will return a few times before it closes …. if  anyone would like to join me sometime that would be cool (a perk of the membership!) 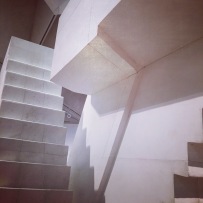 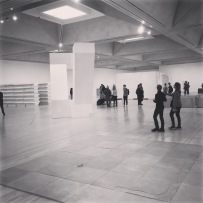 Rachel Whietread is probably most famous for the cast of a Victorian house in 1993/4 …. which you can watch in this you tube documentary here:

The ‘blurb’ from the Tate brochure says:

Her sculptures are made using the technique of casting with materials such as rubber, resin, concrete and metals. Unlike traditional cast sculpture, which is intended to replicate objects, Whiteread’s works instead cast the space inside or around everyday forms.

I’ve always loved the concept and I have wanted to see her work for a few years. I was definitely not disappointed and fell in love with a few space sculptures …. particularly  the stairs (my pic above) and one hundred spaces.

For me, there is something profound and inviting in exploring the underside, the hidden side, the space around rather than the object itself. Through investigating the hidden side, Whiteread has revealed a beauty and uniqueness that we would never otherwise notice, that we would never otherwise experience, and so our perception of that image would be forever lacking something quite integral and profound. The scary thought though, I believe, is that it is possible to believe we have a full image while being totally unaware of the hidden.

I think the innovation of looking underneath, behind, below, above and around is vitally key to my pioneering and how I seek to engage with others. Finding and exploring those hidden spaces off the beaten track, or down the dark alleys of cities has often meant I have stumbled on scenes of unexpected beauty. It has always, without doubt, been in the ‘hidden’ spaces which I have searched out that I have had some of the most profound and humbling experiences with amazing, often hidden, people. Amazing awesome people who have been told and treated in ways that make them feel unworthy and useless.

As I continue my journey, which of recent time has been bloody painful on a number of different levels, I will continue to explore the hidden in full expectation of continuing to be surprised by what I find.

On the flip side of that … I guess there is a question in how much do we compact into our personal hidden paces, how much have we been led to believe that our hidden stuff is unacceptable and only fit for hiding. I suspect we all have a fair share of that …. I look forward to the day that maybe mine will be found and transformed!

To return to the start of the post … if you get a chance, go see the Whiteread exhibition … did  I say it was stunning and all about exploring spaces …. yes? …. well go look!