On Sunday we remembered at the Gasworks WW1 Memorial here on the Peninsula. It was a special morning for a number of reasons. 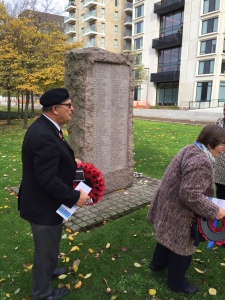 It was special because we were joined by Derek and his daughter. Derek had recently found out that his grandfather was on the memorial and came to lay a wreath, believing that he and his daughter would be the only two there. The look of joy on his face when he saw the HT community gathered around the memorial and the vulnerable dignity he expressed as he lay his wreath brought tears to the eyes of this community.

It was special because 17 people were there and all apart from one person came back to Cafe Pura for a drink and a discussion based on remembrance. The questions we considered were challenging …. but we like to be challenged! The conversation was good …. but the feeling of community, and the attitude of respect and wanting to hear stories was heart warming. People stayed longer than I thought they would … this time together seemed to be something that people were looking for.

I have hope from Sunday … hope that people outside of HT who live on the peninsula  do value contact and community. I hope we see Derek next year. I hope our young people do not forget what today is about.

But then, as well as remembering those who served us in the past, today is also about hope …. the hope that out of death comes new life … symbolised by the perennial poppy … epitomised in the resurrection of Christ.