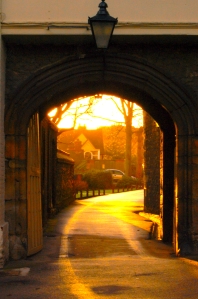 Yesterday I attended the diocesan gathering, Beyond the Big Society, which was an incredibly valuable day – not least for the input and challenge of Archbishop Rowan in the afternoon.

After hearing about some initiatives around the diocese which seek to transform community we heard from speakers of national, and international organisations (Stop the Traffik, Mothers Union, Housing Justice). I found much of what they presented to be a challenge and a reminder to what we are called to eb as church. All the organisations offer suport ans advice to groups of people who wish to make a difference in their community.

In the afternoon Archbishop Rowan got us thinking and asking ourselves what is different about the approach of the church. He started with a scene setting text from Revelation 3:8, ‘I have placed before you an open door that no one can shut‘.

He suggested we talk about the church being different to other groups involved in social action, and followed that with presenting a need to know what it actually is that is different, or distinctive, about us as we move towards the open door. He suggested that as church, what is distinctive about us, is that we take responsibility for each other. The church has a strong outlook of mutual nourishment where we give to each other because we have freely received.

In thinking about Big Society he suggested that a healthy and functional society enables small communities of mutual service to both be born and grow to sustainability. I was encouraged by the thought that, as church, we should be moving, luring and prodding society in this direction of mutual service … a fairly trinitarian concept … so prodding in the direction of God then!