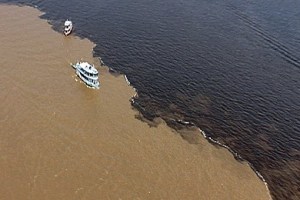 Wednesday is a study for me as a curate and I spent today reading Fritz Kling’s ‘The Meeting of the Waters’. The book takes its title from the meeting of 2 different coloured rivers, the Rio Negro and the Rio Solimoes, at Manaus in Brazil (as shown in the picture). The subtitle, 7 Global Currents That Will Propel the Future Church, particularly attracted my eye!

Kling went on what he has termed ‘a listening tour’ of the global church, asking the same questions to different groups of people over the period of a year. He has noticed 7 trends that have emerged from their conversations around the world.

The book is written in a lively engaging style through the lives and eyes of others and encourages us to take note of what is happening in order to ask ourselves, as church, ‘what do we do to engage authentically?’ The last sentence of his opening chapter drew me in which I guess is why I have read it from cover to cover today …

… the currents provide a starter kit for a new generation of globally minded Christians who want to see God’s kingdom come – in brothels and barrios, in statehouses and criminal courts, in movie theatres and boardrooms, and in rain forests and greenbelts.

For me,  as a person who’s good socialist roots have instilled within me a strong preferential for the poor, reminds me that the kingdom is not just for marginalised and the oppressed.