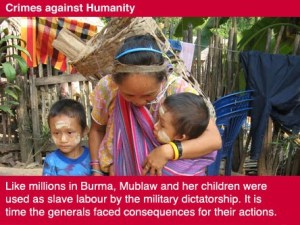 Please respond to this letter if you can – £15 is such a small amount of money!

I wanted to write to you about my first hand experiences of the brutal
regime in Burma. It’s often said that Christmas is a time for children and
what I saw just a few weeks ago is not something you’d choose to read about
at this time of year, or at any other time. But as you are someone who does
not turn their backs on the people in Burma, I’m sure that you will want to
know.

Eastern Burma is turning into the Darfur for the next decade – and we need
your support with a donation of £15 today to help prevent this from
happening.

You can donate here.

I was on the Thai/Burma border to show a delegation of UK trade unionists
the situation and to run some training sessions with local groups & other
activists. There I also spoke to a woman, a mother, who has managed to cross
the border to Thailand with her two young children and escape slavery.

Mublaw is 40 years old and is from a village in Pa an district in Eastern
Burma. It was a small village with less than 40 houses and around 200 people
in total. Armed supporters of the dictatorship in Burma came to their
village in June this year. All the villagers were forced to go with them to
carry their food and military equipment. For four nights, Mublaw was made to
carry three rocket launchers on her back, whilst clutching her 6 month old
baby and dragging her 3 year old toddler as they walked.

Amongst the party, children as young as nine years old were forced to carry
heavy equipment to prevent them from being able to escape. Mublaw was given
two small packs of low quality rice each day, which she flavoured with a
little chilli powder. This was the only nutrition Mublaw and the two
children received.

The soldiers forbade the children to cry. So Mublaw had to cover her baby’s
mouth at all times. They were also not allowed to stop, so children had to
simply wet themselves as they walked. The villagers were not given any
water. They had to wait for it to rain and ask permission to drink the rain
as they moved.

The former villagers, who are now over the border in Thailand, are just
surviving. Some of them risked their lives going back to their families in
Burma.

This story of Mublaw, her children and the villagers is just part of the
human rights abuses in Eastern Burma today. As the Burmese regime has
increased their militarization in the last year, it has meant that at least
75,000 people became refugees and more than half a million were internally
displaced in Eastern Burma.

But Mublaw and the others have not suffered the most. An alliance of 12 aid
organisations stated that:

“…forced displacement of over 3,000 villages in eastern Burma, and
widespread and systematic sexual violence, torture, and summary execution of
innocent civilians. Yet… the UN Security Council has not moved to
investigate potential crimes against humanity or war crimes in Burma, as it
has in other areas of the world, including Darfur and Rwanda.”

In January 2010, the Burma Campaign UK will step up this campaign. We will
be calling for more aid to deal with the immediate human rights abuses. And
we will be lobbying for an investigation into crimes against humanity in
Burma.

And we need your support with a donation of £15 today to help us achieve
this key campaign goal.

The Burma Campaign has had significant success in 2009. We played a key role
in the campaign for a global arms embargo against Burma. Together with our
partners across the world we have begun to build a global consensus for a UN
arms embargo against Burma, in order to help overcome expected opposition at
the Security Council by Russia and China. We have 32 countries supporting
the embargo, recently including the first Asian country. This has been
possible due to the commitment of supporters like you.

Your support of the Burma Campaign UK does turn into positive action for the
people of Burma. That’s why we need you to donate £15 today so that the
innocent victims in Burma – people like Mublaw, her baby and her young child
– don’t face abuse by the Burmese dictatorship for years ahead.

Many thanks for your support.