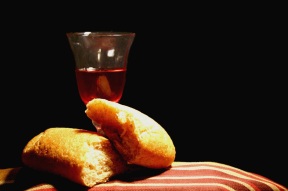 The end of term at the Koinonia Federation is always busy for everyone, the chaplain included. Being the end of an academic year, there are people moving on and new people joining. This week there were will be both sadness as we say goodbye to some great people and excitement as we look ahead to working with a new team.

One of the exciting things for me this week as chaplain was presiding at the first ever school Eucharist in our secondary school. During the preceding two weeks I had the pleasure of teaching all 6 classes an RE lesson on The Eucharist. This was an interactive lesson which the students responded amazingly well to with some great conversations as we discussed the meaning and names of Eucharist across the Christian tradition. One student summed it up by saying … ‘So … Rev Rob … you are saying this one meal is the same thing but we all call it a different name and think some slightly different beliefs about what is happening … but they are all the same and all equally valid?’ Job done!

During the lessons we came up with a practice of ensuring all students and staff felt included in this celebration. We decided that people should have the freedom to come forward or stay seated. We discussed that some might want to come forward forward for a blessing rather than receive bread. We then discussed that some may feel left out who did not want to receive bread or a blessing and so decided people should have the freedom to come forward and say no thank you or simply shake their head.

On Monday morning we celebrated Eucharist for the first time. The students were fantastic in their level of respect and there was an amazing atmosphere of inclusion as most students came forward, some of faith and some of none, to receive bread, or a blessing or simply to come forward as part of the school family. There was a tangible sense that this was a special time for all of us who were there.

Sometimes being school chaplain means you get the privilege of being involved in some amazing things.